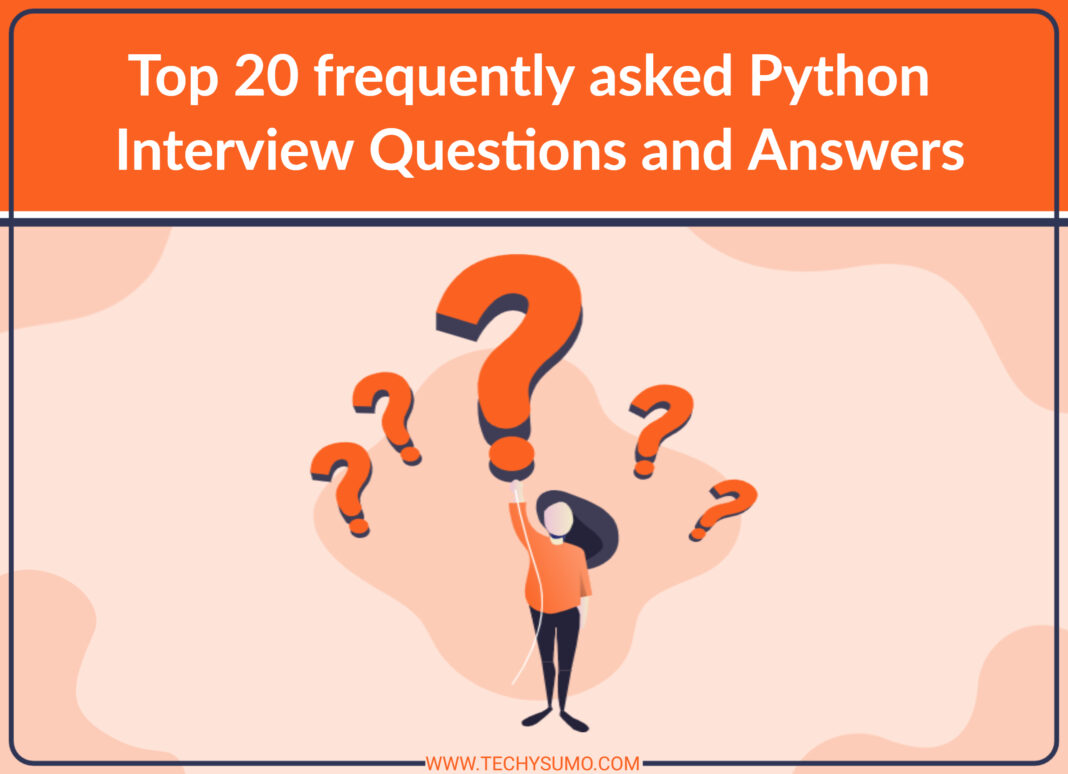 This article will guide you from basic to advanced level of Python Interview Questions that will help you ace your upcoming interview.

Below is the list of the 20 most popular and frequently asked python interview questions. So, let’s get started.

Q1.) What is Python Programming Language?

Ans. Python was created by Guido Van Rossum in the late 1980s. It is simple, high-level, Object-Oriented programming which is widely used for Scripting, Web Application Development, and Data Science.

Q2.) Why is Python preferred over other programming languages?

Ans. Python is very famous and widely used because of below reasons:

b.) Compatibility with different platforms like Linux, Windows, MAC

Q3.) What are literals in Python?

Ans. Literal is a notation for representing a value in source code. There are five kind of literals in Python:

It is created by writing text value in single, double or triple quotes.

Type of String literal with single character. For Ex . ‘a’

Q4.) What are the functions in Python?

Ans. Functions in Python are piece or block of code to be written once to perform a particular task and executed as many times as required.

Q5.) What is the syntax of a function in Python?

Ans. Below is the syntax of a function in python.

Q6.) What are constructors in Python?

Ans. Constructors in python is a special kind of method which is used to initialize the instance of the class.

Q7.) What are destructors in Python?

Ans. Destructors are called when created objects are destroyed. Syntax for destructor is “__del__()”

Below is the syntax for declaring a destructor :

Ans. Tuple is a built-in collection which is used for storing multiple elements. Tuple are :

a.) Ordered : Elements will be fetched in the same order in which they were entered.

b.) Immutable : Once a tuple is created , elements can not be added/ removed/changed.

Q9.) What are lists in Python?

a.) Ordered : Elements will be fetched in the same order in which they were entered.

b.) Mutable : Even after List’s creation , elements can be added/ removed/changed.

a.) Mutable vs Immutable

b.) Homogeneous vs Heterogeneous

Tuples are fixed in length whereas lists have a variable length.

Q11.) What is a dictionary in Python?

Ans. Dictionary is a built-in collection in Python. It is used to store the elements in the form of keys and value pairs.

Note : Keys in a dictionary are unique whereas values can be duplicate.

Ans. Elements of a collection can be accessed through index. Index is traversed from Left to Right where index 0 is first positive index and for negative index -1 is last negative index.

Ans. Below are the key differences:

a.) Syntax of Python 3 is easier compared to Python 2

c.) Upon dividing 2 integers float value is output in Python3 whereas value is integer in Python2.

d.) Recent libraries are created in Python3 and few libraries of python2 are not compatible with Python3

Q14.) What are Local and Global variables in Python?

Ans. Local Variable : If a variable is declared inside a function’s body then that variable is called a local variable .

Global Variable : if the variable is declared outside the function’s body then that variable is called as Global variable

Q15.) What is lambda in Python ? Why is it used and what is its syntax?

Ans. Lambda is a single expression anonymous function (function with no name) in python. Lambda is used when you wish to achieve the functionality in fewer lines of code.

Below is the syntax of Lambda :

Ans. Copy module is used in Python to create a copy of the object in Python.

Ans. break , continue and pass are the keyword used in the program and perform below operations:

pass : It represents null operation in Python. It is generally used for the purpose of filling up empty blocks of code.

break : It is used to terminate the loop immediately and controls the flow of the statement.

continue : This statement terminates the current iteration of the statement and control flows to the next iteration.

Ans. Slicing means cutting a part from an entity. Operation of slicing can be done through python as well.

Below is an example :

Q19.) How to insert comments in Python’s code?

Below is an example:

Ans. Self is an instance or an object of a class. The self variable in the in it method refers to the newly created object.

This brings us to the end of the blog on the top 20 python interview questions for beginners and advanced. We hope that you are now better acquainted with the concepts. Good luck for your interview and happy learning!